Introduction: The "core tide" that lasted for two years is gradually fading, but the structural lack of cores is still continuing, such as car chips are still scarce.Earlier, the industry predicted that the core of automobiles in 2023 would be relieved, but the situation was still severe.As cars have become the fastest -growing demand growth rate in recent years, "getting on the car" has also become a new driving force for domestic chip manufacturers to chase.

Today, according to the Taiwan Electronics Times China, industry insiders have pointed out that although some IDM factories have been adjusted recently, in general, the total value of long -term contract transactions has basically maintained unchanged. It is estimated that it is only structural.Adjustment.Looking forward to the vehicle demand in 2023, it is still optimistic.Some IDM factories stated in the middle of the year that the orders in 2023 were full.

For example, although the semiconductor cycle has occurred in staged adjustments, it benefits from the needs of new energy vehicles and new energy power generation. The power device represented by IGBT (insulating grid bipolar tube) is strong., Capacity supply should be in short. 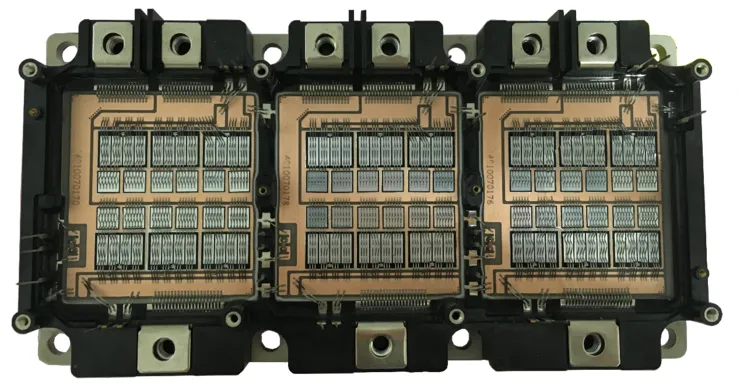 As a leader in IGBT, Sida semi -guided net profit in the first three quarters of this year reached 590 million yuan, an increase of 1.21 times year -on -year, the growth rate exceeded operating income, and the sales gross profit margin reached 41.07%, which increased from the previous month.

At the Sida semi -guided third quarter performance briefing on December 5, the company executives introduced that the main driving force for revenue growth in recent quarters came from the company's products in new energy vehicles, photovoltaic, energy storage, wind power and other industries.The market share continues to improve; with the release of large -scale effects, product structure optimization, and improvement of production and operation efficiency, the company's gross profit margin continues to grow.

From the perspective of income structure, from January to September, Star's semi -guided income from the new energy industry (including new energy vehicles, new energy power generation, energy storage) accounted for more than half, and became the main driving force for the company's performance growth.

IGBT Peers Hongwei Technology also benefited from the development of the new energy market. In the first three quarters of this year, the company realized a net profit of 61.25 million yuan, an increase of about 30 % year -on -year.The gross profit margin was 21.77%, about half of Sida.

In addition, in the first three quarters of this year, the net profit achieved a net profit of 774 million yuan, an increase of 6.43%year -on -year. When the recent investigation of the institution, the Silan Micro executives predict that the company's revenue in the fourth quarter is expected to stabilize and improve.Products have gradually met with a large number of shipments.

It is worth noting that the storage giant continuously increases the car storage market, and the car track is warm in the "storage cold winter".Samsung, Micron, Huabang, Wanghong, South Asia and other mainstream manufacturers have launched corresponding car storage products.

China is the world's largest storage chip consumer. However, at present, due to the relatively limited scale of automobile storage tracks, and long -term R & D, certification, and testing cycle of automobile regulations.Essence

Hua'an Securities believes that despite the high barriers to storage of car -level storage of vehicle, the proportion of localization will continue to increase. It is recommended to pay attention to Beijing Junzheng, Zhaoyi Innovation of Beijing Junzheng, Zhaoyi Innovation, and Dongxin shares in the automotive storage field in the near future.In terms of storage modules, it is recommended to pay attention to Jiang Bolong and Baiwei storage. On the other hand, recent news from China Economic Daily, China, showed that many car manufacturers have recently announced the increase in the price of new cars. The industry pointed out that the cost of raw materials has risen is one of the factors for price increases, but the supply of new cars caused by chip shortages can only be seriously insufficient in supply.It is the key to the original price increase.When can the chip shortage be relieved, according to the relevant information of various manufacturers, at least it will not have the opportunity to improve after the middle of next year. The internal information of Toyota in Japan is still insufficient in vehicle supply in 2023.Another car manufacturer has stated that the current supply of vehicle chips is still insufficient, and it is expected to have sufficient supply after 2024.

Furthermore, the latest news shows that the Chicago Federal Reserve Bank Policy Consultant Kristin Dziczek wrote a report on the production capacity of automobile chips, the report believes that the shortage of automotive chips is still continuing, and it is estimated that it will continue until 2024.

Looking back at last month, a report issued by the US consulting agency Alx Partnership showed that the restrictions on German car production by the chip shortage will "last at least 2024".The German News Agency reported that at this stage, it takes 6 months from ordering to delivery, which is twice that of normal time.

This report written by an industry expert: "With the continuous development of digitalization and electrification, each car's demand for chips continues to increase, but due to economic downturn and interest rates, semiconductor manufacturers are self -suppressing production capacity expansion."

The profit margin of traditional car chips is as low as 11 percentage points lower than the chip used by electronic consumer goods or industrial customers.From the perspective of chip manufacturers, the automotive industry "is just a small customer of semiconductor chips", accounting for 6%to 10%of global chip production capacity.The report analyzes that "chip production is still the bottleneck of the automotive industry."By 2024, the chip will still be in short supply, and the price increase will eventually increase the sales price of the car.