In the future, the PCB market will exceed $ 100 billion! 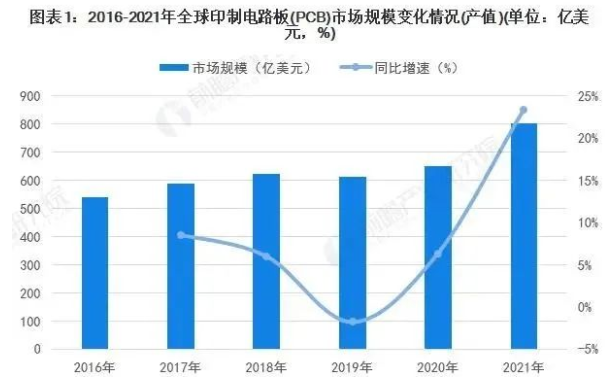 Rigid board is currently the mainstream product type

From 2016-2021, in the global PCB market, rigid boards still account for the mainstream position. Single-panels, double panels and multi-layer boards are rigid boards. Among them, the proportion of multi -layer boards in 2021 was about 39%; and the proportion of single/double panels accounted for more than 10%; followed by flexible boards, accounting for 17%; HDI boards and packaging substrates accounted for about 15%and 18%, respectively. Essence

With the booming development of the PCB industry technology, electronic products have become more prominent on the high -density requirements of PCB. According to the information of Shengyi Electronics, in the next five years, under the data processing center drive, packaging substrates and multi -layer boards will grow rapidly. 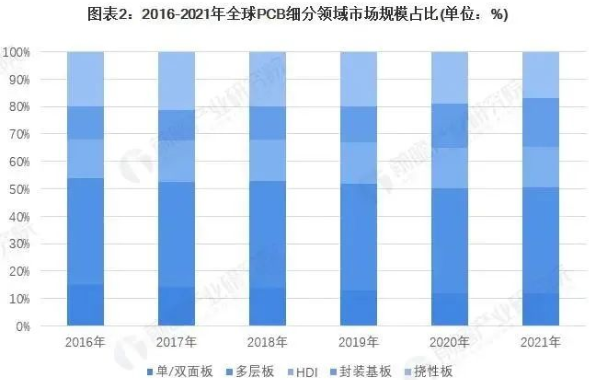 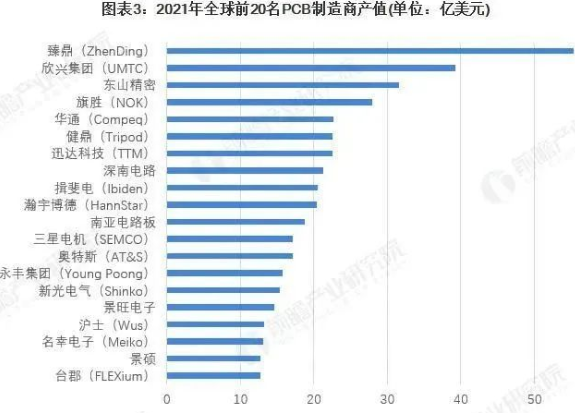 Communication and computer are the main application fields

According to PRISMARK data, among the market size of the global PCB industry in 2016-2021, the proportion of advanced communications and computer markets fluctuates around 70%, and consumer electronics and automotive electronically downstream market demand has remained stable fluctuations.

Taken together, the global PCB industry applications are mainly advanced communication and computers. In recent years, electronic products and technology have become more and more advanced and advanced. At the same time, the gradual popularization of 5G, the Internet of Things, and cloud storage will stimulate the market's demand for high -performance, high -capacity communication equipment and servers; With great development potential, the application of PCB in the field of advanced communication and computer will be deeper. 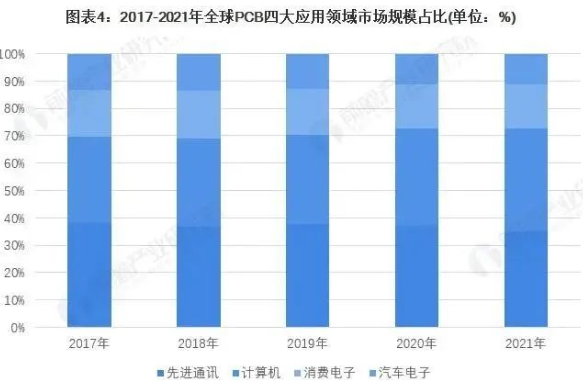 According to the PRISMARK forecast, the global PCB market will maintain a moderate growth in the next five years. The Internet of Things, automotive electronics, industry 4.0, cloud server, storage equipment, etc. will become a new direction for driving PCB demand growth. In 2027, the global PCB market size will exceed $ 100 billion, with an average annual growth rate of nearly 5%.

There are four major development trends in the global market

PRISMARK is expected to continue to dominate the development of the global PCB market in the next 5 years, while China is unshakable in the Asian market. Under the trend of PCB's "large -scale and centralized" trend, it has established a large -scale PCB of the leading advantage earlier. The company will gain a greater advantage in the future global market competition.

In terms of product types, the PCB industry is the industry with the largest output value in the global electronic component segmentation industry. With the deepening of research and development and the continuous upgrading of technology, PCB products have gradually developed in the direction of high density, small pores, large capacity, and lightness. 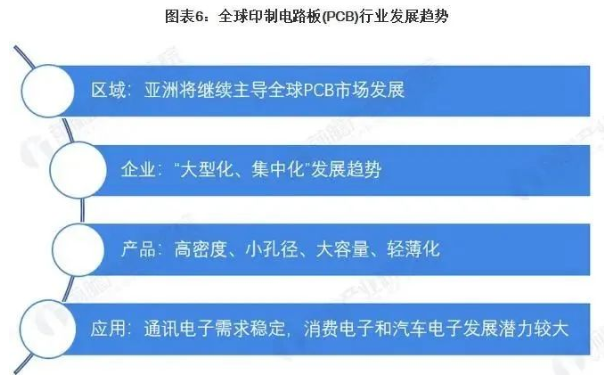 With the rising sales of new energy vehicles, various industrial chains in the upstream and downstream have also ushered in rapid development. At the same time, benefiting from the growth of downstream market demand, technological upgrading and recovery of supply chain, the PCB industry has continued to rise. It is understood that the proportion of automotive electronics in the cost of the entire vehicle is different: according to market positioning, the proportion of car electronics in compact passenger cars and mid -to -high -end passenger cars is 15%and 28%respectively; according to the type of power type, respectively; From the perspective, the cost of hybrid and pure electric passenger cars accounted for 47%and 65%. 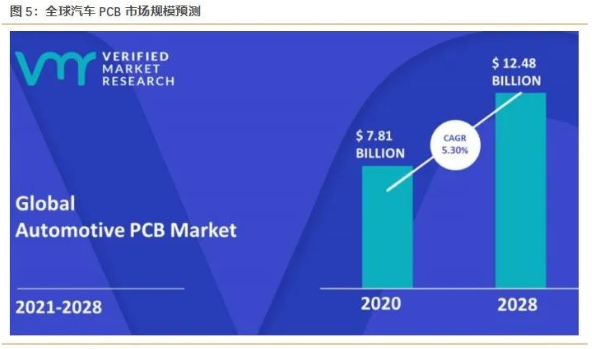 The first is that the original advanced driving assistance system (ADAS system) is no longer limited to high -end models, and is gradually extending to the mid -end market and entry market. Including safety functions, such as driver fatigue driving alerts, blind spot monitoring, and sensors required for autonomous driving assistance functions, they are inseparable from a PCB that can ensure the above functions of efficient and stable implementation.

The second is the smart cockpit, multi -screen development, and seat electrification significantly increased PCB dosage. In order to cater to consumption upgrades, major hosting manufacturers have become more in the third space. Smart cockpit can realize entertainment, interconnection, positioning, and service functions. In addition, the rapid growth of the Internet of Vehicles has increased the T-BOX assembly rate correspondingly. For example, data transmission, remote control and security services can be achieved on the mobile app.

For the specific dosage of the PCB of the above modules, public information shows that the VCU and MCU are 0.03 square meters and 0.15 square meters. Due to the complex architecture, the BMS needs to be used. The management unit is 2 to 3 square meters.

PCB has abundant application scenarios in various fields of the car, such as control systems, audiovisual systems, GPS modules, etc. In the future, with the continuous improvement of automotive electronics, the demand for car PCB application will continue to increase.

On the other hand, the continuous improvement of ADAS penetration and automation under the wave of intelligence, the accelerated penetration of new energy vehicles under the wave of electrification, and some car electronic components that were originally used for mid -to -high -end models such as anti -dead braking system (ABS) , Electronic Stability Control System (ESC), reversing imaging system, etc. accelerated the penetration of medium and low -end models, etc., all directly promoted the increase in car PCB.

With the continuous improvement of PCB demand and the iterative upgrade of technology, the technical changes of PCB are also advancing with the times. As the basic piece of electronic machine products, the quality of PCB will directly affect the performance and life of the electronic machine. The certification of PCB suppliers in large OEMs is very strict. The inspection cycle is 1 to 2 years, but once a stable cooperation relationship is formed, it will not change easily.